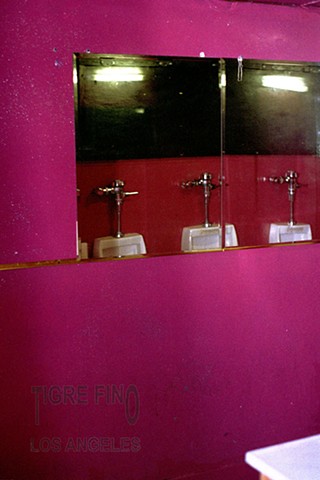 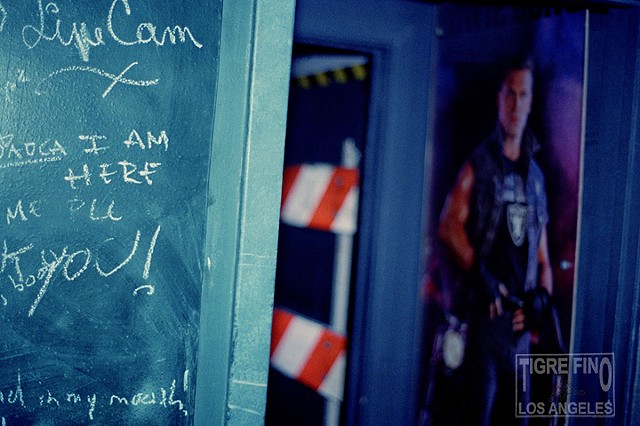 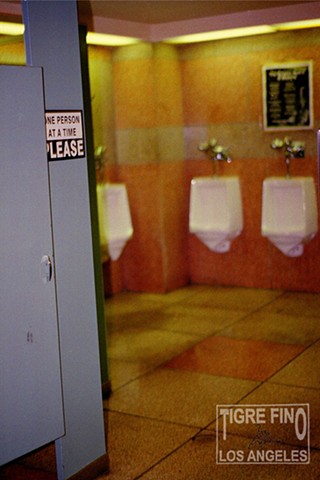 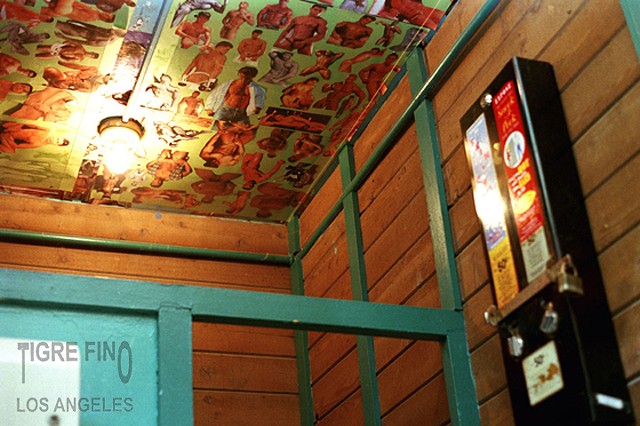 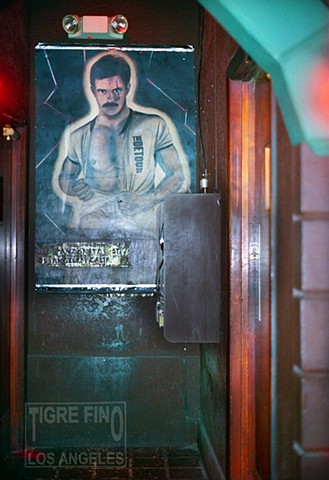 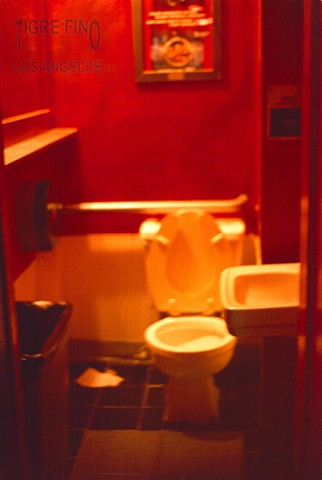 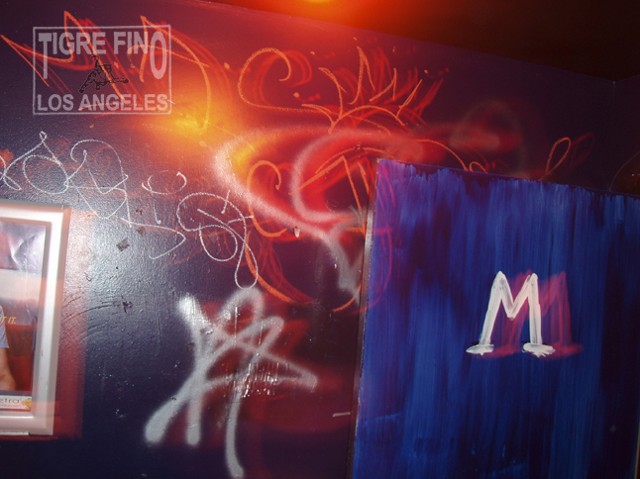 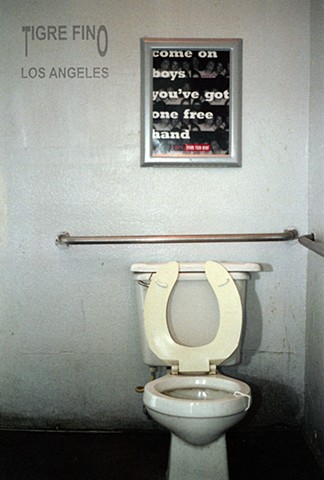 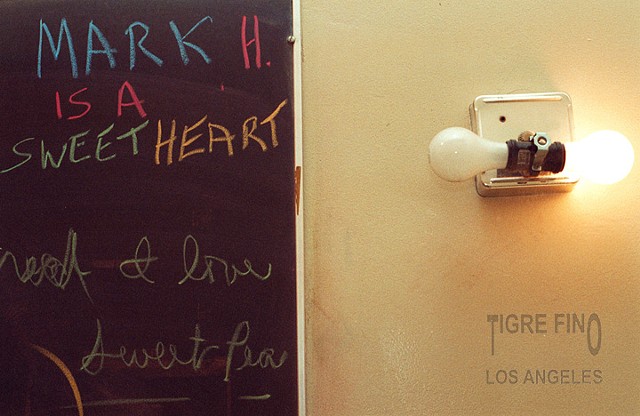 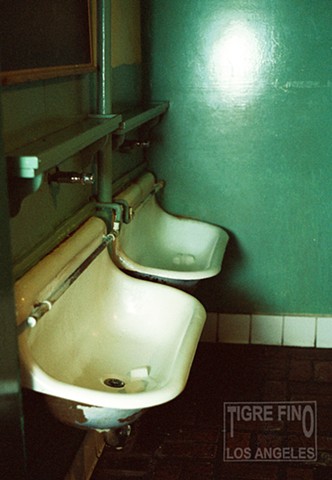 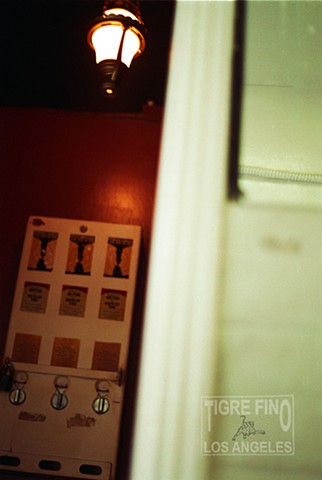 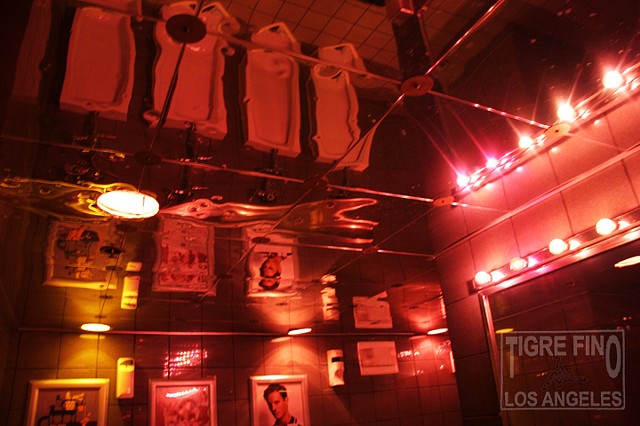 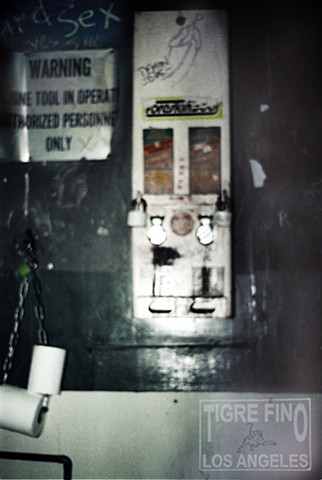 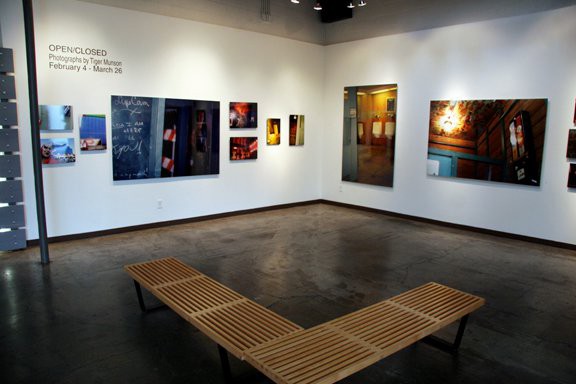 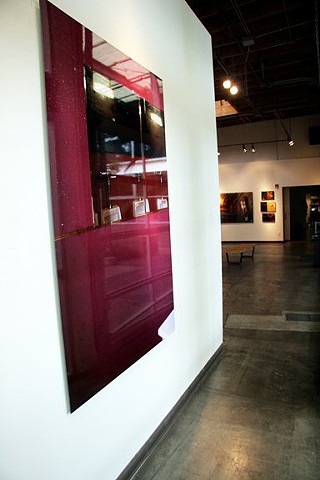 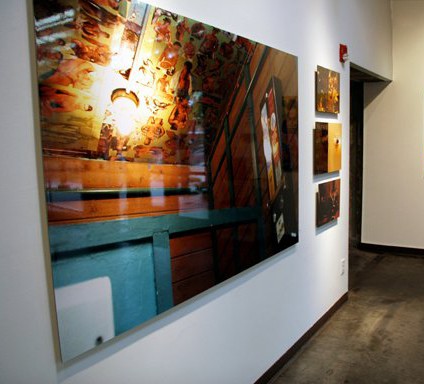 Installation view of Roosterfish in Open/Closed show at Advocate Gallery

These are photographs of restrooms in gay bars in the Los Angeles area, inner spaces that have been overlooked by the culture at large, but which have come to play a significant role in the formation of identity of many gay individuals, as well as facilitating the actual construction of the(se) minority cultures and subcultures by individual members. The resulting images show a wide range of locales, running the gamut from sleazy to sleek, decorated to institutional, funky to impersonal. Many of the locations no longer exist: closed down, painted over, turned into “straight” bars, damaged by fire. In this sense the project is also an impressionistic documentation of community history. Most of the images, culled from hundreds, have been shot on thirty-five millimeter film, drum scanned and printed using digital means on archive paper. Architecturally, men’s restrooms, especially those in gay bars, have a closed nature. Located in a public place, private, sometimes illicit, and always personal acts transpire. In these photos I aim to convey the reality of the men’s restroom and how it both mimics and confounds dominant cultural notions of public and private space, as well as homoerotic desire. In men’s restrooms, as much as one tries to escape the gaze of another man, or of seeing other men in a private act, one at least even peripherally, cannot. This self-reflexiveness and sense of interiority is key to understanding the psychic affect on men in these spaces, especially in gay bar restrooms. There is a heightened sexual eroticism in the men’s room: an expression of a furtive longing in a public space. A place comprised of cold neon lights or bare bulbs, tile or granite, urinals and chalkboards, industrial paint and porcelain, graffiti and condom machines, mirrors and faucets, porno cutouts from magazines posted on the ceiling, flyers and advertisements for cabaret shows, waste baskets and toilet paper becomes the site of an essential testing ground for the development of persona, narrative history, and strange as it may sound, even spirituality. Four of the photos have been printed “life sized,” four feet by six feet. Two of them have a horizontal orientation and two of them have a vertical one. I want the viewer to experience these photographs in a manner akin to experiencing the spaces themselves, as if one were looking into the room, or actually walking into it. In terms of image selection, I wanted to convey a range of styles, moods and feelings and atmosphere that both represent some general visual truths of these bars and the culture from which they spring, but also to allow each bar’s individuality to shine through.