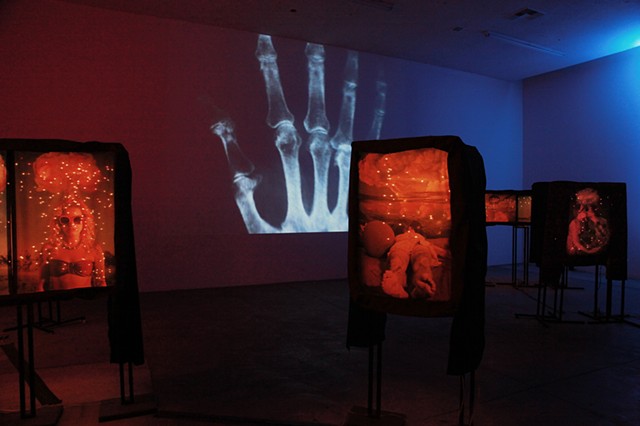 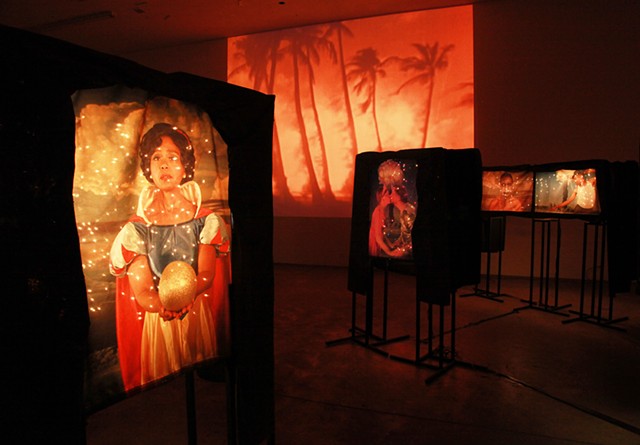 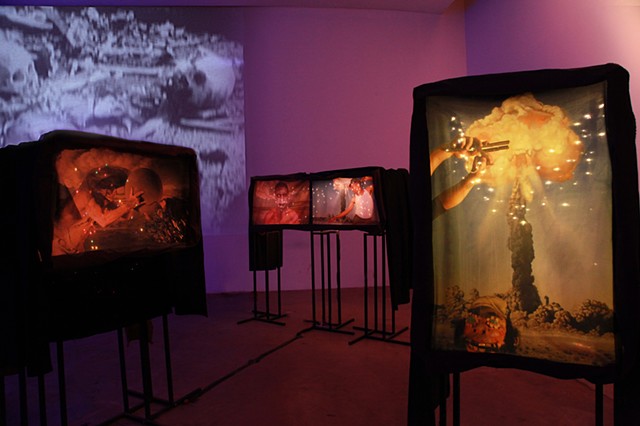 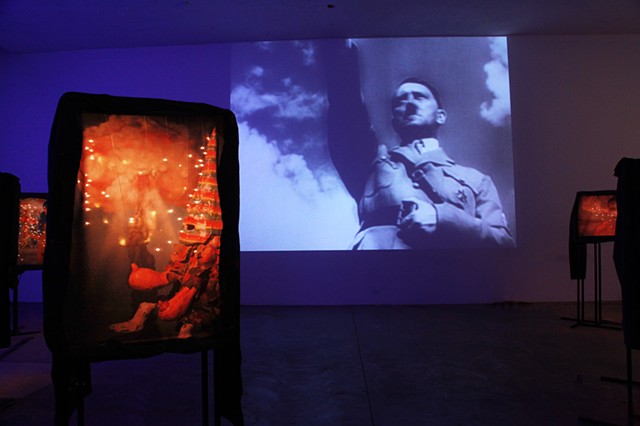 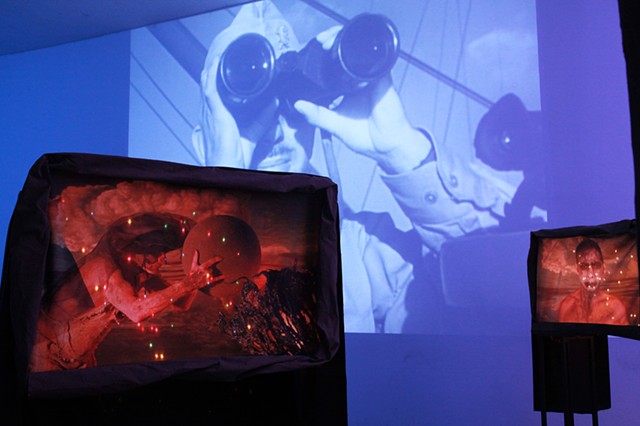 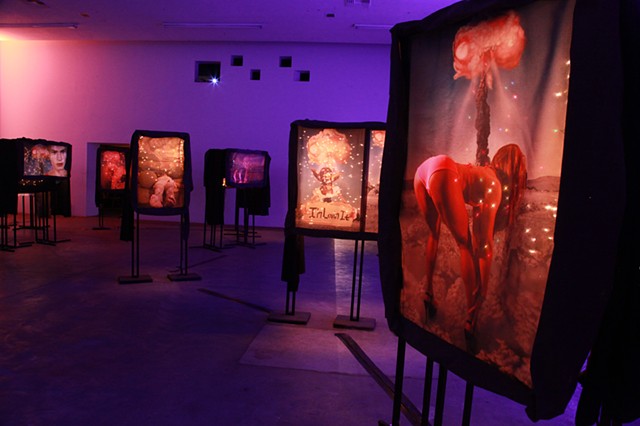 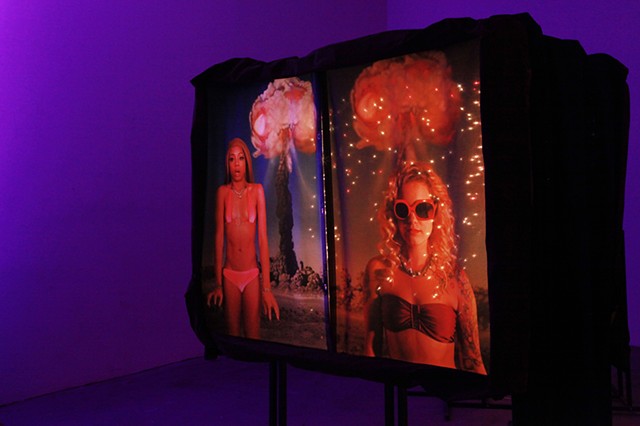 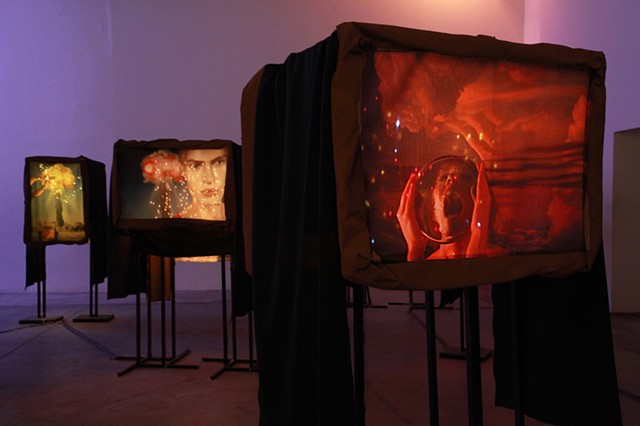 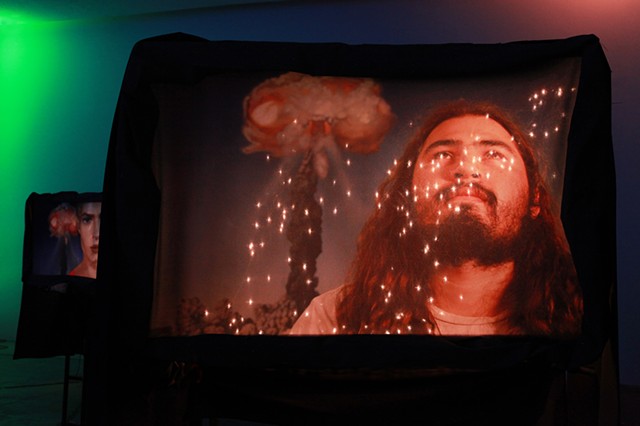 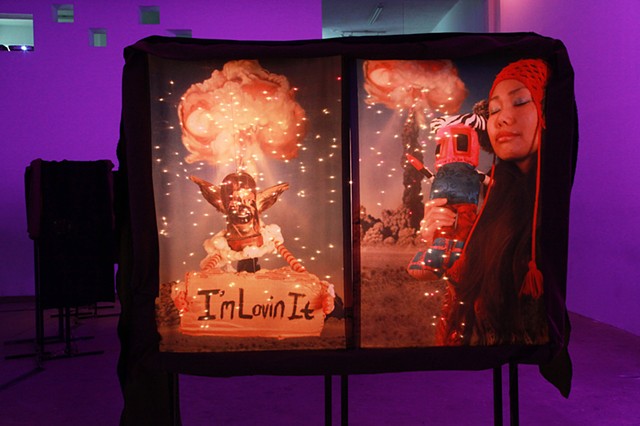 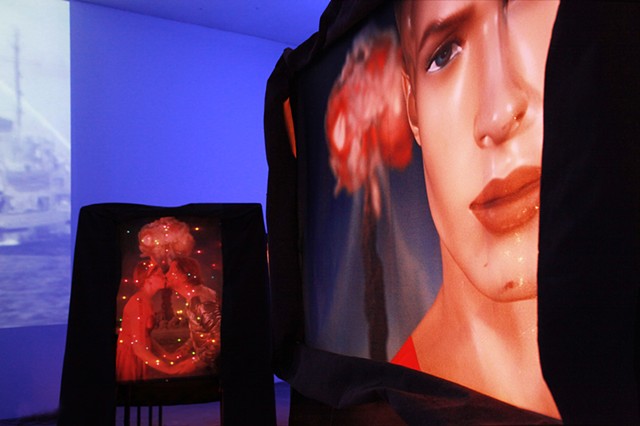 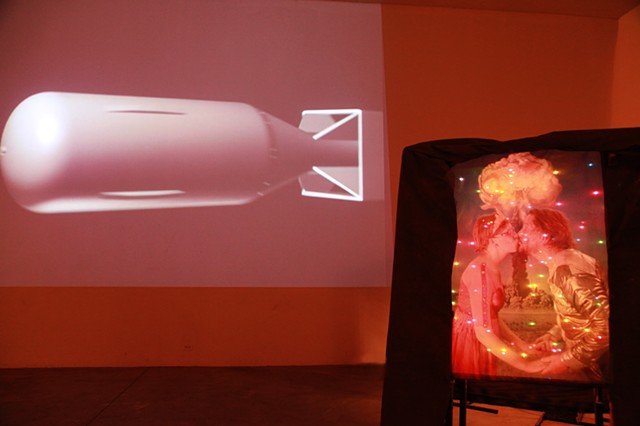 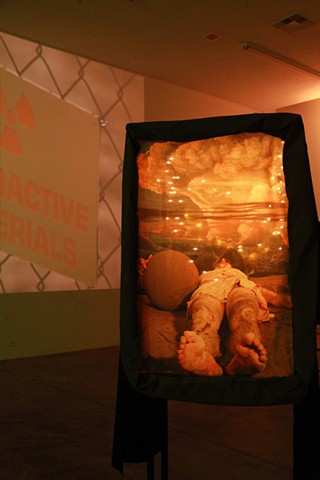 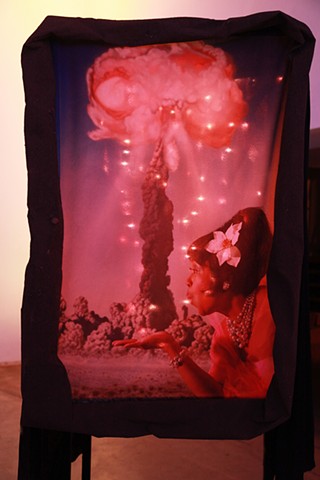 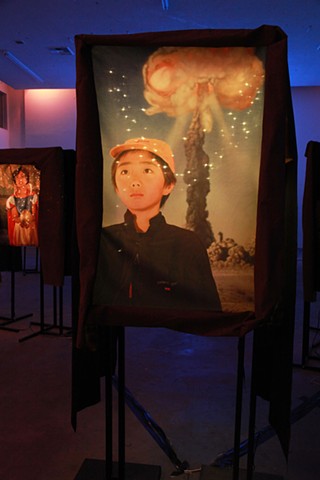 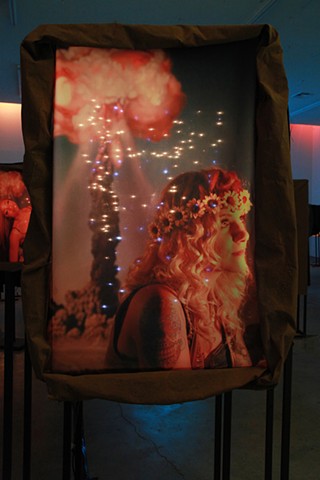 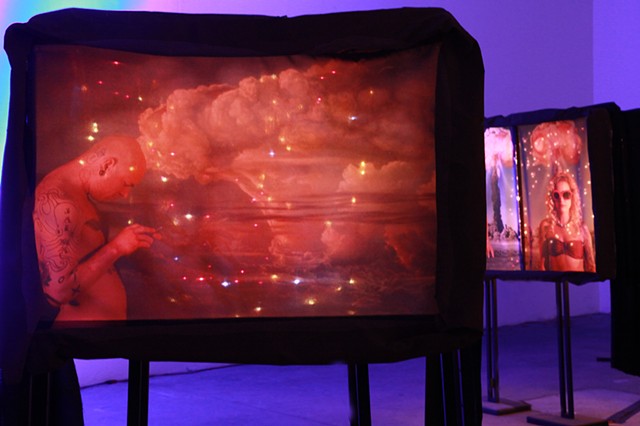 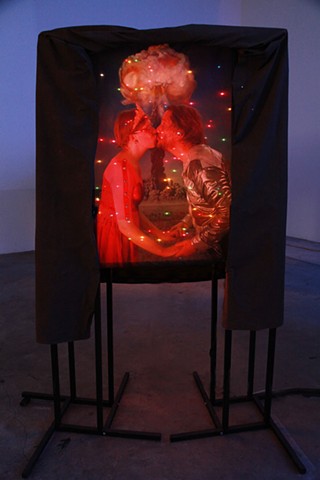 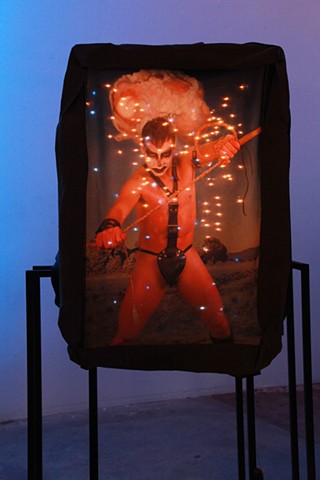 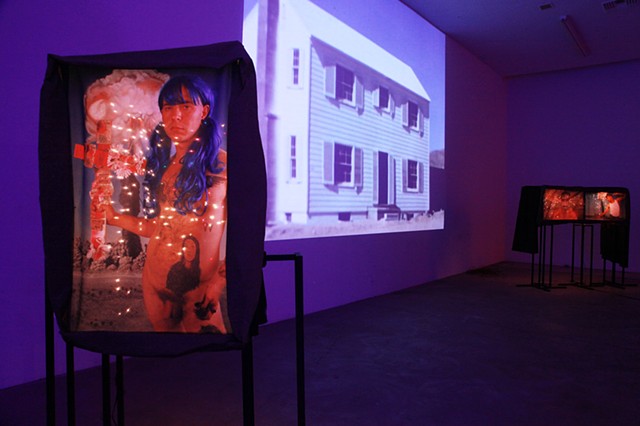 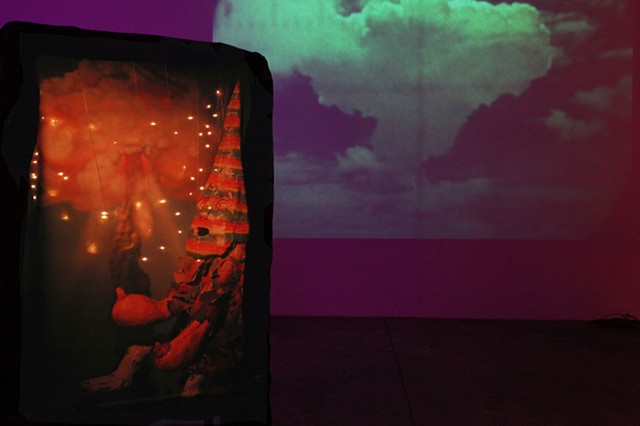 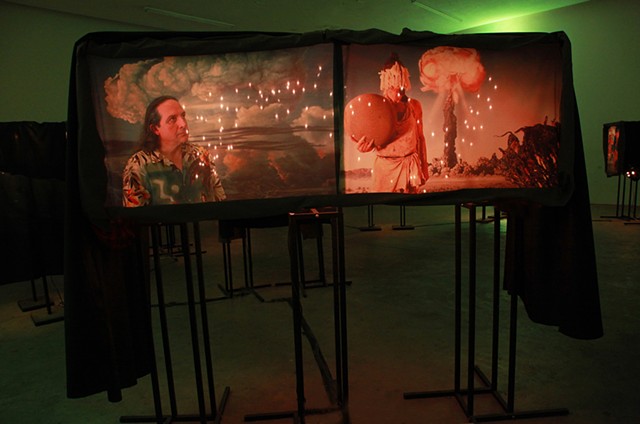 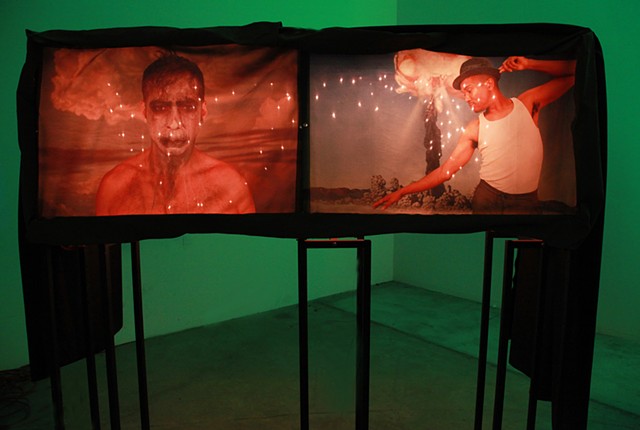 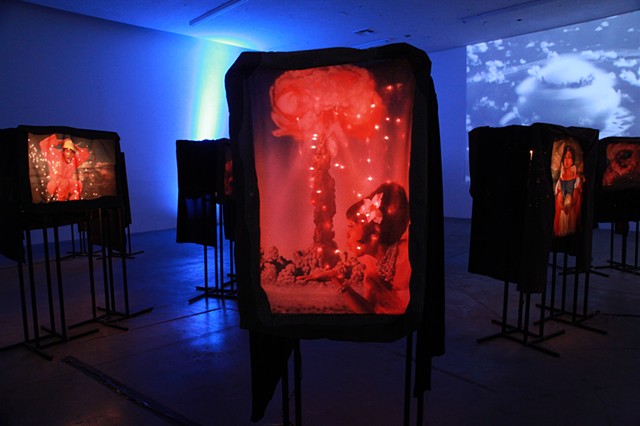 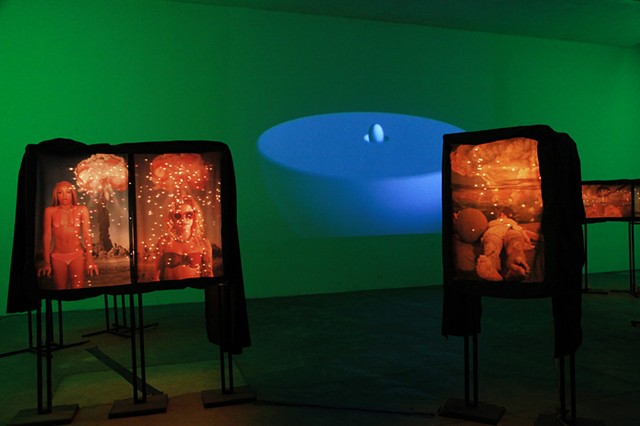 Using backdrops of atomic bomb blasts painted in the 1950’s by a scenic background artist who painted the clouds in the “Wizard of Oz” “Ben Hur “and “Showboat”, among other Hollywood movies, Munson sought to investigate social, historical, and alternate constructs via the portrait studio. The backdrops were jumping off points for intersections of contemporary representation and catastrophe. As artifacts and stand alone works of art, they maintain an aura of both an historical Cold War period of American and world history, and a fictionalized, Hollywood representation of that awareness. The backdrop was simultaneously the object and signifier of “the portrait studio” and functioned as such, and also initiated the creative individual engagements with the subjects. How does the scope of this human historical milestone, both as a direct and mediated cultural consciousness, impact the individual persona? What are our mythologies, hopes, recourses? Despondency, aggression, monstrosity, optimism, survivalism, escapism, transcendence: all are branches to this nuclear tree that fan out in a usual trifecta of contemporary discourse: race, gender, sexuality. These sensibilities extend through the photographic images in this project. In development and under wraps for three years, the images in Numinous Rupture are seeing their debut both as an art project, a photo fabric light installation at Human Resources Los Angeles in Chinatown, and in their photographic form online and in prints. The photographic prints in the exhibition are printed using a dye sublimation process on fabric, erected on modular metal racks spaced around the gallery, and each lit from behind for a reminiscent 3-D perspective and glow.